A new shareholder is driving a challenge to The Home Depot’s No. 1 ranking in the US home-improvement market

In 1946, Carl Buchan was the part owner of a hardware store in North Carolina. Anticipating a post-World War II housing boom, Buchan envisaged creating a hardware chain so he bought out his brother-in-law. More than 70 years later, his efforts have culminated in Lowe’s, the US’s second-largest chain of home-improvement and hardware stores.

Buchan and his successors have done much right in the past seven decades to create a retailer with 2,154 stores across North America that in fiscal 2017 recorded a net profit of US$3.7 billion from US$68.6 billion in sales.

Recent times have been buoyant for Lowe’s and other housing-related businesses. The nine-year expansion of the US economy and the interrelated recovery in housing have buoyed a retail segment that has proved relatively insulated from internet disruption.

Convenience is a big reason why the industry is internet-proof. A large number of stores in close proximity to much of the population service people when they need advice on technical products. The shopping mission often includes bulky goods or urgent purchases that are best done in person. Costly consumables and DIY projects require product selection and planning, both easier done in store. On top of that, demand has been strong for home-related professionals who prefer to buy in store rather than on the internet.

The favourable environment has helped Lowe’s boost revenue by 20% over the past three years though this performance of late has been more sluggish, particularly in the first quarter of 2018. The company’s share price climbed 37% over the past calendar three years.

Lowe’s, however, has an overarching problem in terms of its operational performance. The company isn’t judged as well run as the No. 1 home-improvement company. The Home Depot, based in Atlanta, which recorded a net profit of US$8.8 billion on sales of US$100.9 billion in fiscal 2017, is better at retail basics. Home Depot attracts more people to its stores. The company converts more of those who enter into customers. It entices those supporters to spend more as a proportion of their household budgets. It turns a greater portion of revenue into profits. Home Depot has boosted its same-store revenue for nine consecutive years and the share price has climbed more than Lowe’s in recent years; it rose 83% over the past three calendar years – more than double the gain in Lowe’s. Lowe’s challenge has long been how to stop being overshadowed by Home Depot.

Enter DE Shaw, a New York-based hedge fund. In January this year, Shaw announced it had spent US$1 billion to buy about 1% of Lowe’s and it would use this shareholding to shake up the company. Shaw quickly engineered the appointment of three new directors to the board of Lowe’s. One of the new directors is David Batchelder, co-founder of Relational Investors, who when on the board of Home Depot a decade ago helped turn around that company. In April, Shaw aided the search to replace departing Lowe’s CEO Robert Niblock, who had spent 13 years in the role. And in May a new CEO, Marvin Ellison, who led retailer JC Penny from 2015 and who worked in senior roles at Home Depot for 12 years, was appointed. Investors can expect to be well rewarded if the new management can make Lowe’s as honed as Home Depot. Management is confident that better execution of retail basics means Lowe’s can.

To others, Home Depot has some advantages over Lowe’s that will hobble Lowe’s efforts to match its bigger rival. One hurdle is that Home Depot had a 15-year head start in placing large ‘box’ stores in the best locations in the best cities – and in the homeware and hardware segments, location amounts to a local monopoly. Other challenges for Lowe’s include that housing-dependent businesses are hostage to macroeconomics. Any slowing in the economy and housing and all housing-related industries tend to struggle. The internet will always remain a potential threat.

But Lowe’s under fresh guidance could surmount these challenges or be better placed to cope during any economic and housing downturn. Company insiders estimate that better online offerings, a more appropriate product offering, an enhanced customer experience, and superior servicing of builders and other professionals could reap an extra US$8 billion in revenue each year for Lowe’s while costs could be reduced by some US$1 billion, especially by making its supply chain more efficient. Confidence that Lowe’s can revamp itself is growing, even though the loss of customer traffic and other structural problems won’t be easy to overcome. Evidence? ‘Activist’ investment firm, William Ackman’s Pershing Square Capital Management, in May revealed it had bought US$1 billion worth of Lowe’s shares.

Lowe’s became the US’s – and the world’s – second-largest home-related retailer by offering low prices and one-stop shopping. The company’s margin is based on ‘everyday low costs’ in its supply chain, allowing it to offer profitable ‘everyday low prices’ to people who buy its products and services for home improvement, home décor, home maintenance, home repair, and remodelling and maintenance of commercial buildings.

Lowe’s large-format stores host about 40,000 items over 214 million square feet (19.9 million square metres) of floor space that cater to the ‘do it yourself’ and ‘do it for me’ customers. The latter are professionals who cater for older and time-poor households whom Lowe’s target via the LowesForPros.com website.

While it will always face competition from Home Depot, Lowe’s is protected against other formidable competitors because it operates in a structured and stable duopoly market. Home Depot and Lowe’s control about 24% of the market. The cheaper sources of supplies based on such buying power mean they can undercut smaller competitors. The pair’s size alone gives them much bargaining power with suppliers.

Lowe’s, which was listed in 1961, has a presence in Canada (since 2007) and Mexico (since 2010). For now, though, it’s whether or not the company can meet basic goals such as getting more people into its US stores that will determine how fast goes the expansion that Buchan initiated seven decades ago.

Important Information: This material has been prepared by Magellan Asset Management Limited trading as MFG Asset Management (‘MFG Asset Management’) for general information purposes and must not be construed as investment advice. This material does not constitute an offer or inducement to engage in an investment activity nor does it form part of any offer or invitation to purchase, sell or subscribe for in interests in any type of investment product or service. This material does not take into account your investment objectives, financial situation or particular needs. You should read and consider any relevant offer documentation applicable to any investment product or service and consider obtaining professional investment advice tailored to your specific circumstances before making any investment decision. This material and the information contained within it may not be reproduced or disclosed, in whole or in part, without the prior written consent of MFG Asset Management. Any trademarks, logos, and service marks contained herein may be the registered and unregistered trademarks of their respective owners. Nothing contained herein should be construed as granting by implication, or otherwise, any licence or right to use any trademark displayed without the written permission of the owner.

Statements contained in this material that are not historical facts are based on current expectations, estimates, projections, opinions and beliefs of Magellan. Such statements involve known and unknown risks, uncertainties and other factors, and undue reliance should not be placed thereon. Additionally, this material may contain “forward-looking statements”. Actual events or results or the actual performance of am MFG Asset Management financial product or service may differ materially from those reflected or contemplated in such forward-looking statements.

Certain economic, market or company information contained herein has been obtained from published sources prepared by third parties. While such sources are believed to be reliable, neither MFG Asset Management or any of its respective officers or employees assumes any responsibility for the accuracy or completeness of such information. No person, including MFG Asset Management, has any responsibility to update any of the information provided in this material.

Insights direct to your inbox

Make sense of the global investment landscape with timely updates, articles and videos from our investment experts. 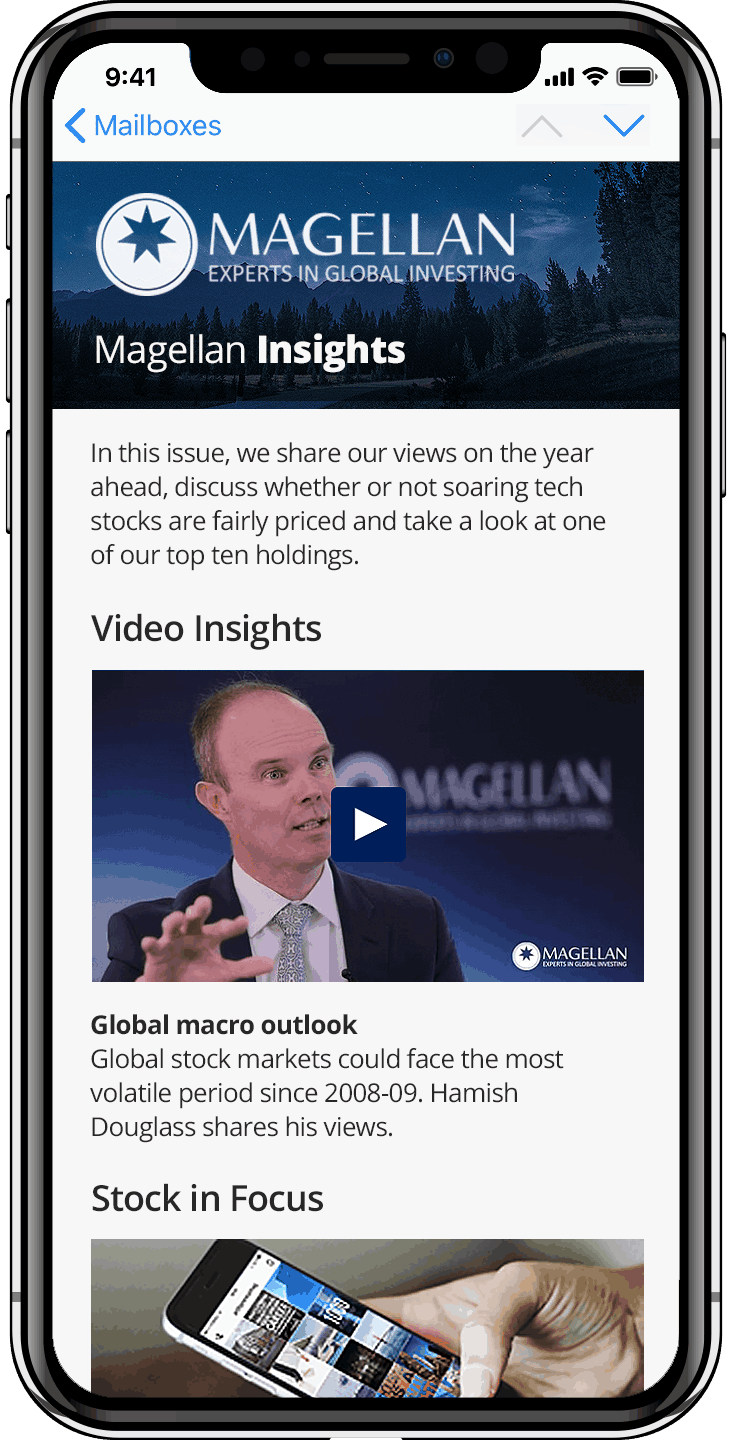 This website contains general information only and does not take into account any person’s investment objectives, financial situation or needs. Nothing contained in the website constitutes a solicitation, recommendation, endorsement or offer to buy or sell any securities or other financial instruments.

Information contained on the Institutional section of this website is not intended for investors in any jurisdiction in which distribution of the information or purchase is not authorized or permitted.

3) A government, local authority (constituted in any jurisdiction) or an international organisation;

4) Any person whose ordinary activities involve him in carrying on an investment activity;

5) A person who is acting in their capacity as a director, officer or employee of the above.

Persons who do not fall into one of the above categories, or who do not otherwise constitute investment professionals, should not read or rely on the information contained on this website.

Any performance data shown represents past performance. Past Performance should not be taken as an indication or guarantee of future performance, and no representation or warranty, express or implied, is made regarding future performance. Investment return and principal value fluctuate so your investment, when sold, may be worth more or less than the original cost; current performance may be lower or higher than quoted. Investors should be aware of the risks associated with investments generally and the increased risks associated with investments in foreign/emerging markets securities, high yield securities and smaller companies.

Important Legal Information: By clicking "I agree," the user agrees that I have read the terms detailed below and confirm that I am an "Institutional Investor" and that I wish to proceed.

Information contained in the Institutional section of this website is not intended for institutional investors in any jurisdiction in which distribution or purchase is not authorized.

2) A bank or insurance company;

3) A pension fund or charity;

4) An individual who provides one or more investment services on a professional basis;

5) Persons whose ordinary activities involve or are reasonably expect to involve them, as principal or as agent, in acquiring, holding, managing or disposing of investments for the purposes of a business carried on by them;

6) Persons whose ordinary business involves the giving of advice, which may lead to another person acquiring or disposing of an investment or refraining from so doing.

Persons who do not fall into one of the above categories should not review the information contained in the site.

Performance data shown represents past performance and is no guarantee of future results. Investment return and principal value fluctuate so your investment, when sold, may be worth more or less than the original cost; current performance may be lower or higher than quoted. Investors should be aware of the increased risks associated with investments in foreign/emerging markets securities, high yield securities and smaller companies.

Thank you for your interest. We are committed to expanding our institutional website to meet the needs of our global investor base. We do not, however, have content approved for your location at this time. For additional information please email institutional@magellangroup.com.au

By clicking on the "I Confirm" button below you are confirming that you are a resident of Australia or New Zealand (or that you are acting on behalf of a person who is a resident in one of those jurisdictions).